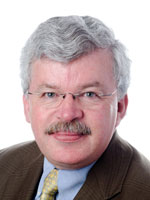 Laurier L. Schramm has over 30 years of R&D experience spanning all four sectors: industry, not-for-profit, government, and academia, and is currently President and CEO of the Saskatchewan Research Council. He has previously served as Vice-President, Energy with the Alberta Research Council, President and CEO of the Petroleum Recovery Institute, and Senior Research Scientist with Syncrude Canada Ltd. For much of this time he served in parallel as Adjunct Professor of Chemical and Petroleum Engineering, and before that Adjunct Professor of Chemistry, both with the University of Calgary. His research interests include colloid and interface science and nanotechnology applied to the oil and gas and mining and minerals industries. His management interests include applied research, technology development and deployment, and innovation.

Dr. Schramm holds 17 patents and has published 9 books, and over 400 other scientific publications or proprietary reports. Many of his inventions have been adopted into commercial practice. He was awarded one of the first NSERC-Conference Board Synergy Awards for Best Practices in University-Industry R & D Partnership, and his work on the development of oil-tolerant foams for enhanced oil recovery was judged to be a Milestone of Canadian Chemistry in the 20th Century by the Canadian Society for Chemistry. He has received other national awards for his work and is a Fellow of the Chemical Institute of Canada and an honourary Member of the Engineering Institute of Canada.

Among other community service contributions he has served for nearly two decades on numerous committees and panels of the Natural Sciences and Engineering Research Council of Canada and the Canada Foundation for Innovation. He has served on national and international expert advisory panels, including the Technical Advisory Board for the Helmholtz-Alberta Initiative (University of Alberta and the Helmholtz Association of German Research Centres), the Expert Panel on Oil Sands Processing (Canada Foundation for Innovation), and the National Panel of Experts on Sustainable Energy Science & Technology (Natural Resources Canada). He has also served on the Boards of Directors or executive/management committees of numerous other organizations. He is a co-founder of Innoventures Canada Inc. and a co-founder of Canada’s Innovation SchoolTM.